The acute housing demands of asylum seekers pose a distinct challenge that extends beyond the concern of built matter. At this moment, when so many are fleeing their homes under threat of death and violence, our humanity demands us to offer our compassion and hospitality. Yet this issue has understandably become politically sensitive. Concerns about security, different cultures and ways of life and the added financial burdens on the state, have made the issue of housing asylum seekers a controversial one. In this light, temporary housing is fundamentally different from disaster-relief housing scenarios. The “not in my backyard” mentality that surrounds asylum seeker reception centres and housing, demands not only efficient and cost-effective solutions, but a need to address socially and politically sensitive issues as well. For architecture to meaningfully intervene requires a shift beyond the understanding of housing as designer “objects”, but to consider the organization of the city and the nation as a whole.

Finland is a country with low population density that is highly concentrated around a few major urban centres. This becomes problematic for the competition task as housing in major urban areas is already supply constrained and high in cost. On the other hand, the large number of asylum seekers makes any concentration in rural or sparsely populated regions risky, potentially transforming the area into an isolated enclave. Rather than attempt to reconcile this challenge with a permanent intervention, this project recognizes that to be an asylum seeker is an inherently transitory phase. An asylum application is inevitably either denied or accepted, at which point the asylum seeker is granted a resident permit. Once a resident, the accommodation of refugees should be no different from any other resident, and a matter of national housing policy and strategy. As such, this project proposes to address the competition task by explicitly revealing the transitory status of asylum seekers by integrating their temporary accommodation with the national railway - to establish an asylum seeker safety network, Turvaverkosto.

Finland’s state railway company, VR Group has suffered continued budget cuts and disruptions to its services as it becomes more and more difficult to maintain viable routes in sparsely populated regions. This is indicative of a broader shift in the policies of the Finnish welfare state, as the trend in migration towards major urban centres has concentrated democratic power and resources in urban areas. While this appears inevitable under the politics of austerity, it also makes it worryingly easy to accept reducing the quality of life for those left behind and further exacerbates the migratory trend as services to these regions are reduced. To counter this tendency, this project proposes to intervene at the scale of the national rail network and strategically reuse under-utilized or recently terminated services as accommodation and service points for asylum seekers.

With Turvaverkosto, asylum seekers are integrated into a dynamic national network that allows new resources to be utilized in addressing their acute demands for housing. The project renders the transitory status of asylum seekers explicitly visible and avoids naturalizing the fundamentally sensitive issue of housing asylum seekers. All while still offering them hospitality, safety and a chance to understand the way of life in Finland. By intervening at the scale of the railway network, this project recognizes the productive potential of the asylum seekers. With rapidly aging demographics and low birth rates, increased immigration is seen as being vital to the future of Finland. Simply with their presence, asylum seekers can make viable services that lacked the critical mass to be maintained. Turvaverkosto proposes not only to meet the needs of housing asylum seekers but also contribute to the discussion of refugees, immigration and the future of Finland. 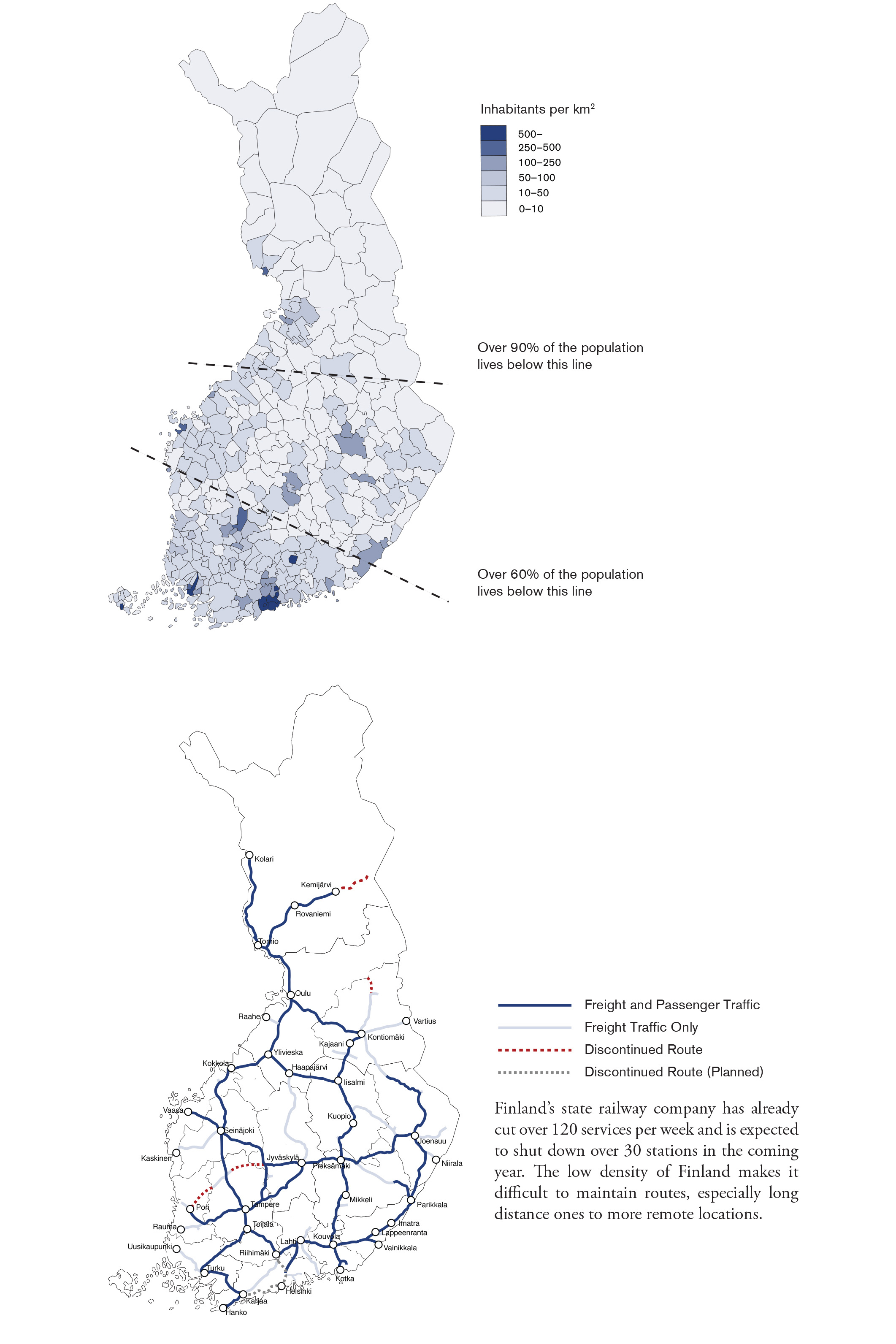 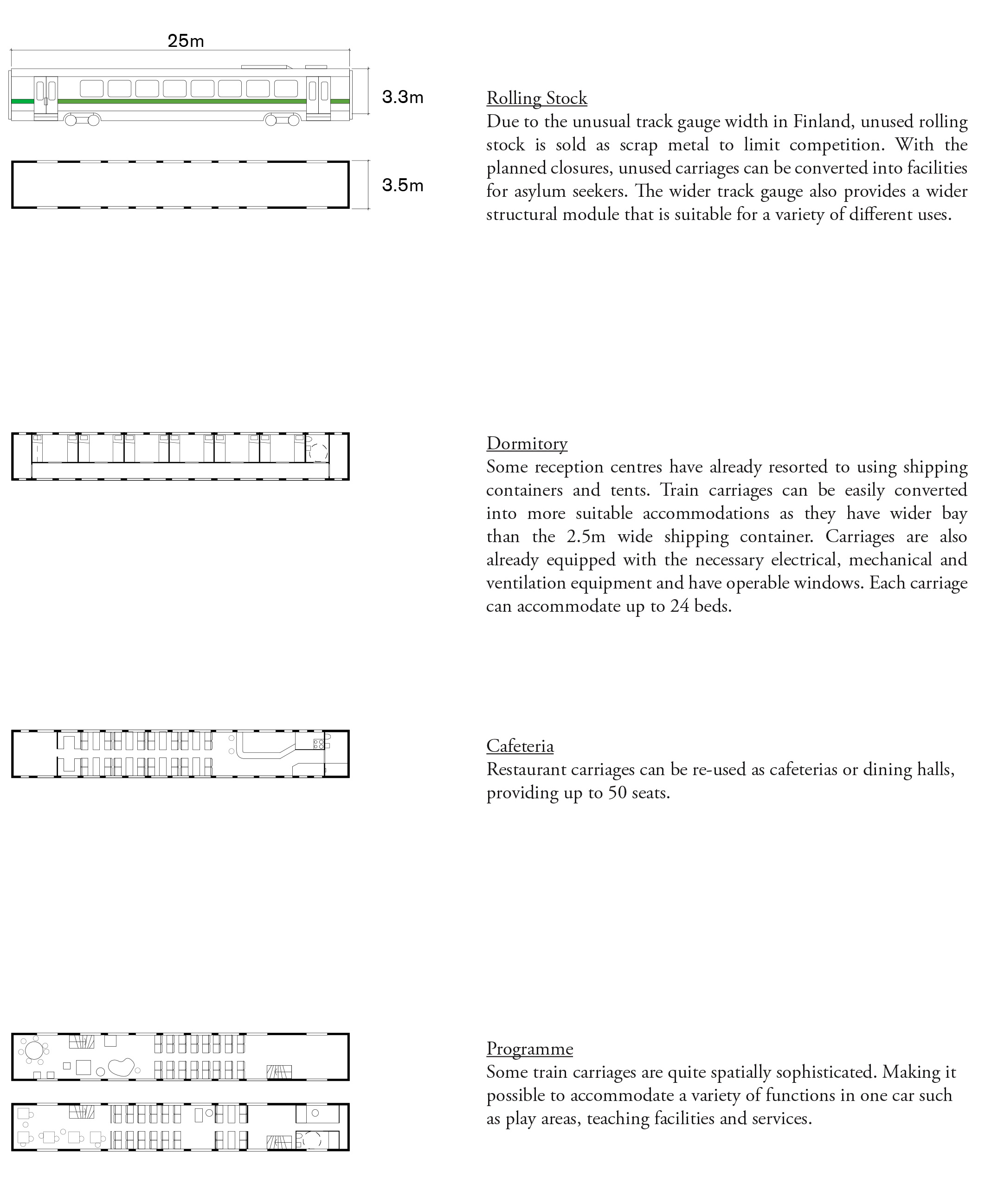 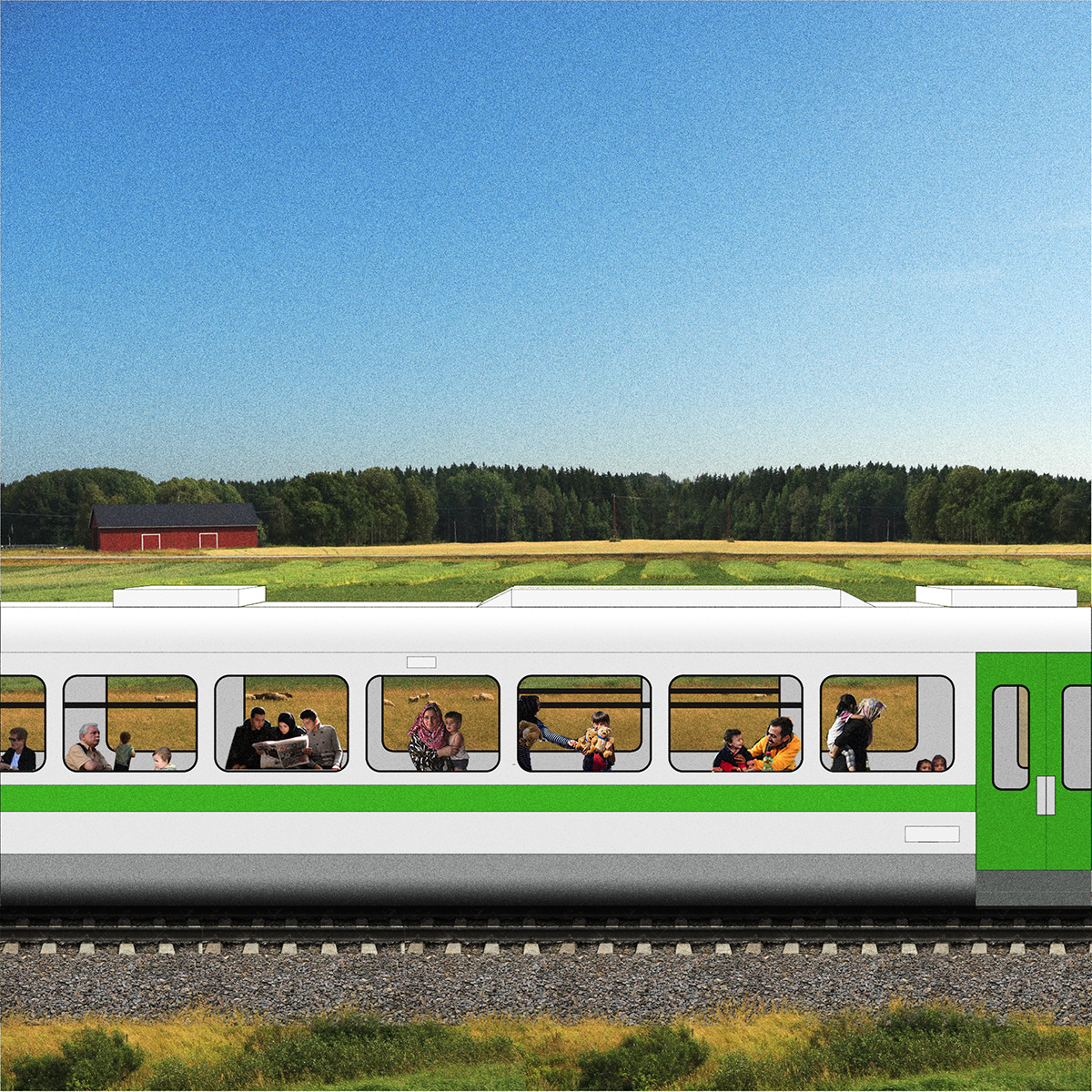