What is productive?
To consider the productive city is to reconsider the dual meaning of productive in society today. On the one hand, productive conjures up imagery of local manufacturing and the return to traditional skills and labour. An imagery sustained as a paradigmatic counterexample to the disruptive environmental, social and economic effects of multinational capital. On the other hand, to be productive in basic economic terms refers to the production of market value, and at the scale of the economy, measured by GDP per labour hour worked. In today’s global market economy, capital has constantly increased its productivity by reducing the cost of labour and moving manufacturing outside the city to access cheaper labour overseas. Western economies in turn, have shifted away from the production of physical goods towards high value immaterial forms of production; such as the production of digital and cultural commodities, service work, and finance. The dual meanings of productive thus underlines a fundamental contradiction with the productive city in a European context. In the pursuit of productivity, production has become increasingly immaterial.

One of the byproducts of the turn to immaterial, Post Fordist modes of production is the concentration of domestic migration around major urban centres, which provide the intensity of interaction and social connectivity that are vital for jobs in the Post Fordist economy. While economically this has been successful at the scale of the nation, this has left small towns and cities like Narvik to face an increasingly uncertain future. Unable to rely on the physically productive industries that once sustained them, they also cannot compete in the Post Fordist economy without a critical mass of inhabitants and activity. A prospect that grows increasingly unlikely as the young continue to move away in the pursuit of better job opportunities.

The young in turn, face a paradoxical situation, in the pursuit of jobs, they have moved to the big city only to find increasingly unaffordable living conditions. Constrained by supply and the effects of speculative real estate capital, housing costs have increased dramatically over the past decade. For Narvik, this presents an opportunity to reconsider its productive future in the Post Fordist economy. By utilizing one of the most valuable assets available to the city - access to a stable living environment, this project proposes a new model for innovation in Narvik, by establishing a framework for residency in the Technical Quarter.

Beyond Production
The concept of residency has been well established in the creative and academic fields, which offers the residency as a living environment for academics, artists and curators to pursue independent creative work. The residency is established on the basis that there is social and cultural significance to the work that is worth supporting outside of normal economic structures. This project proposes to radically expand the concept of residency beyond a narrowly defined ‘creative’ or academic designation, and to recognize the cultural and social value of all forms of work. The residency offers the opportunity to bring individuals with diverse skills and backgrounds to Narvik. From scholars to tradesmen, to elders and students - the residents are a rotating community with the freedom to pursue meaningful work, while establishing a baseline for innovation in the region through seminars, workshops and exhibitions.

The Narvik residency is proposed as a direct counter project towards the growing popularity of ‘maker spaces’ or ‘innovation centres’, where access to new fabrication or digital technologies claim to herald a new era in the democratization of the means of production. The profound irony to such claims is that today the most productive form of capital is real estate capital, not the machinery of the assembly line. As housing costs continue to outpace wage growth in major urban centres, to simply reconsider the production of housing as a means of valourizing immaterial labour is a powerful instrument for Narvik to engage on a global stage.

The project consists of a series of new public facilities that complement the existing building of the Technical Quarter. The old Technical Town Hall and Fire Department buildings are already spatially suitable for use as individual workspaces. What is needed in the Technical Quarter are the resources for the residency participants and the residents of Narvik to pursue collaborative work and public events. As such, all existing structures are reused and enhanced with the addition of two precise architectural elements, a podium and a horizontal slab building. These two elements contain the additional collaborative open plan workspaces, housing and public outdoor spaces that are needed in the Technical Quarter.

The existing workshop spaces are extending into a ‘factory floor’ with a grid of steel columns, which provide the open and flexible spaces for assembly, prototyping and small scale production. As the project site slopes significantly, the factory floor forms a podium that establishes a new datum across the entire site, connecting the Technical Quarter with a level outdoor public space. The podium enhances the existing buildings by creating new backdrops for existing spaces. For example, the high ceilinged garages are repurposed as a public seminar room and a canteen, which now opens onto an outdoor terrace with views to Bromsgård Park. The terrace is also generous enough to accommodate seasonal outdoor activities such as gardening and outdoor events.

The second element - the horizontal slab building, traces and extends the footprint of the existing workshop building, allowing the existing workshops and parking to be re-used, with only the roof structure needing removal. The new slab building provides gallery access studios for 32 residencies over two levels. While on the podium level, the slab houses open plan workspaces for public use, facilities that provide new resources for the existing organizations in the Technical Quarter. The project layers different public programmatic elements together with the residency to encourage interaction with the community, bringing a new productive ethos to the region. 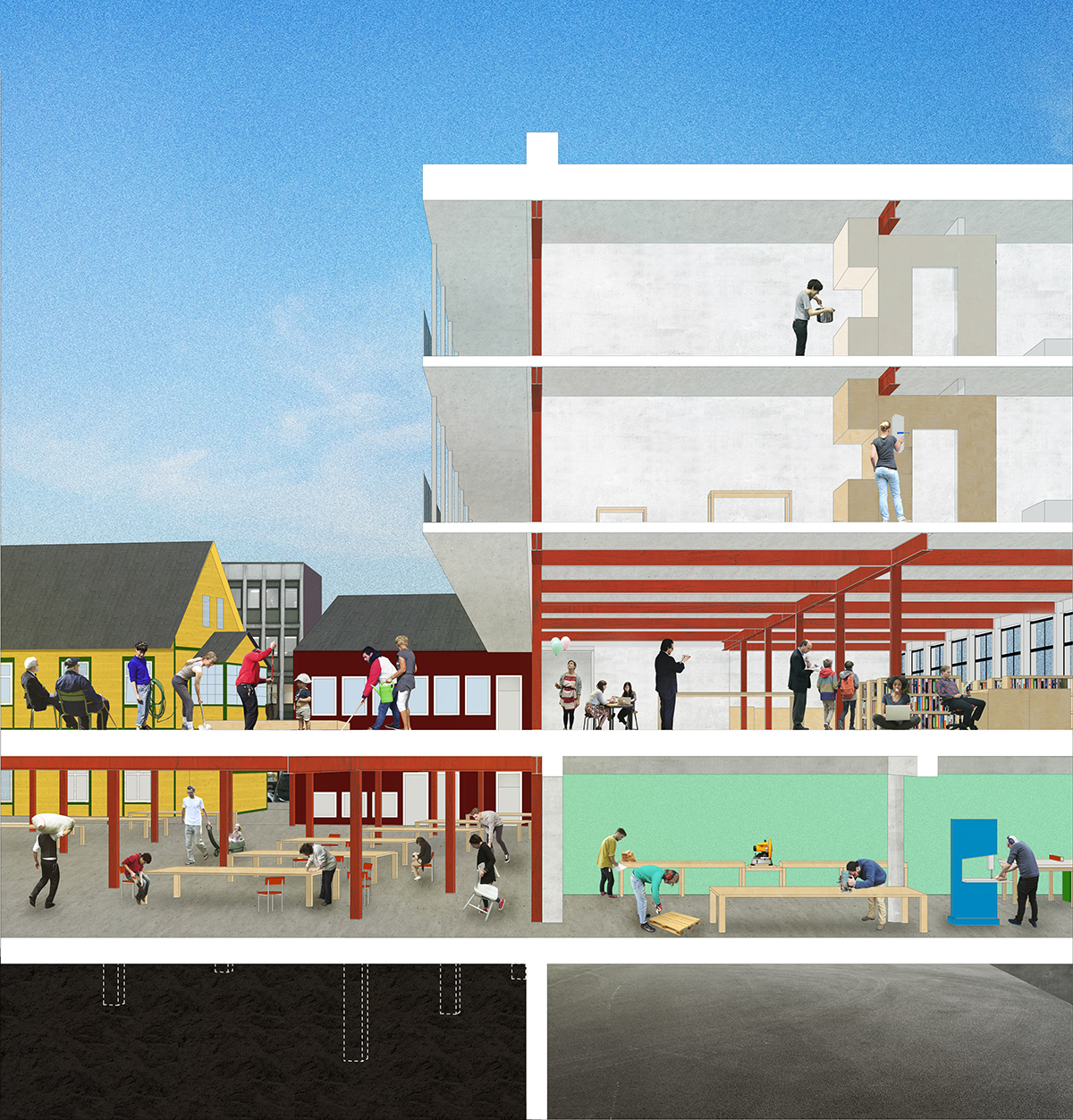 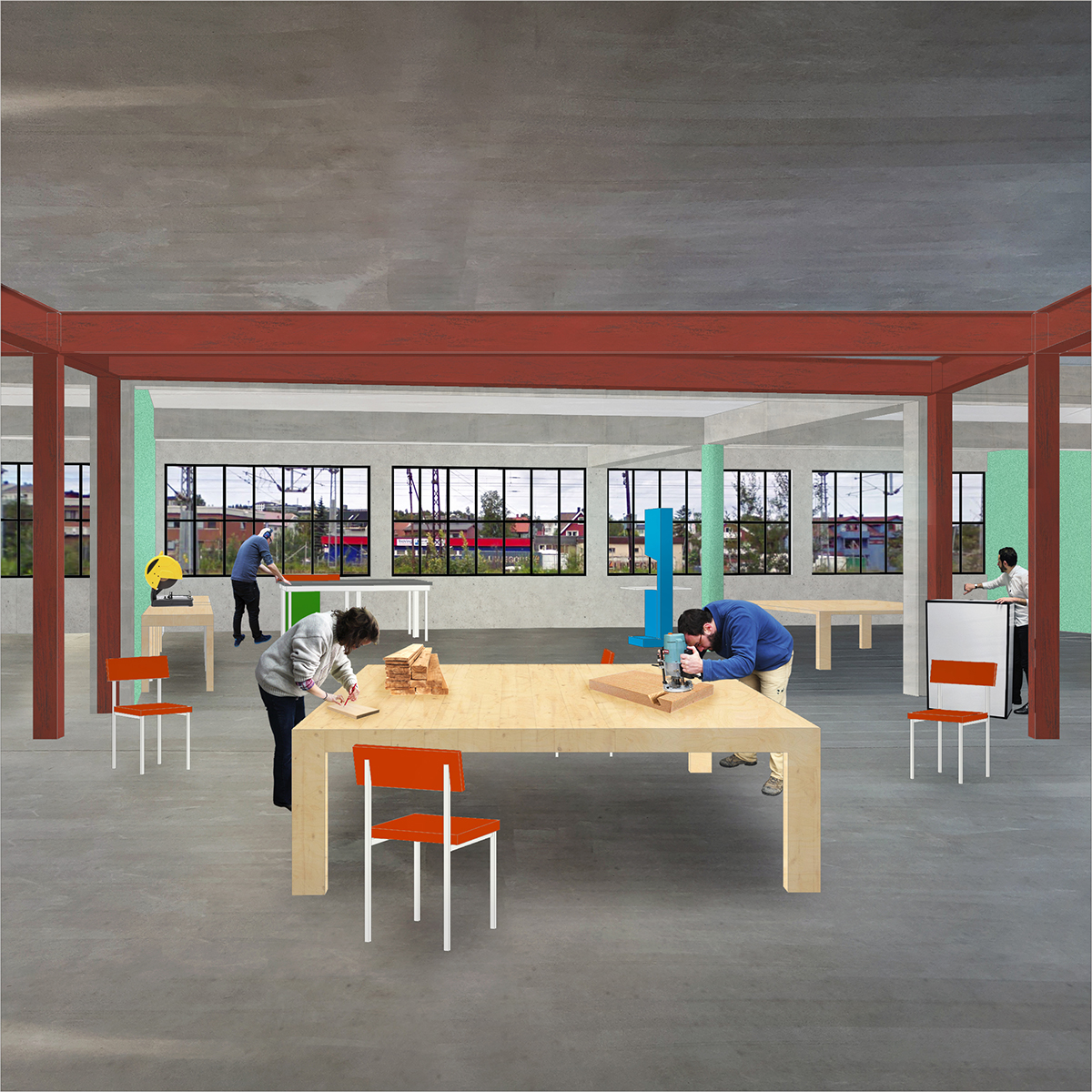 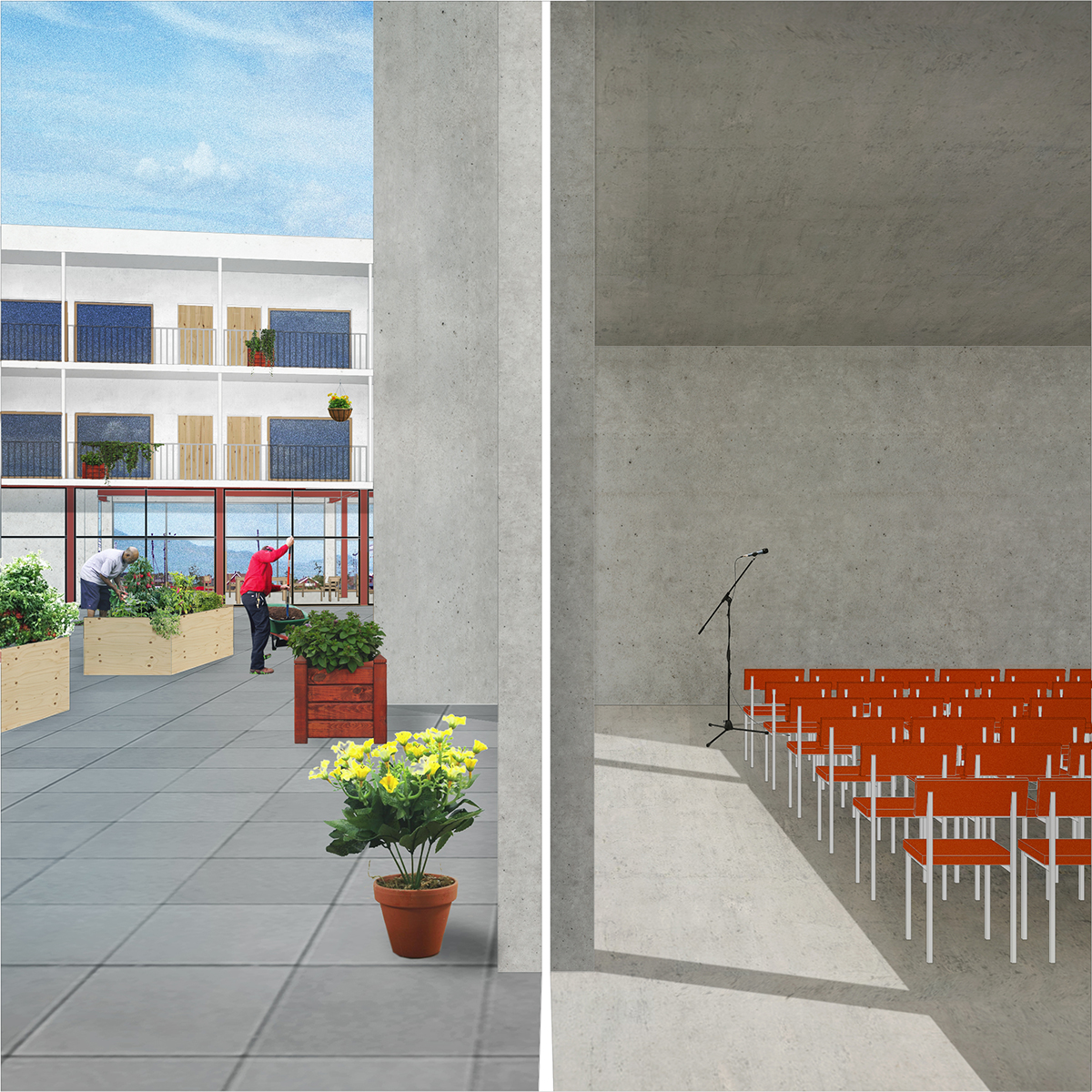 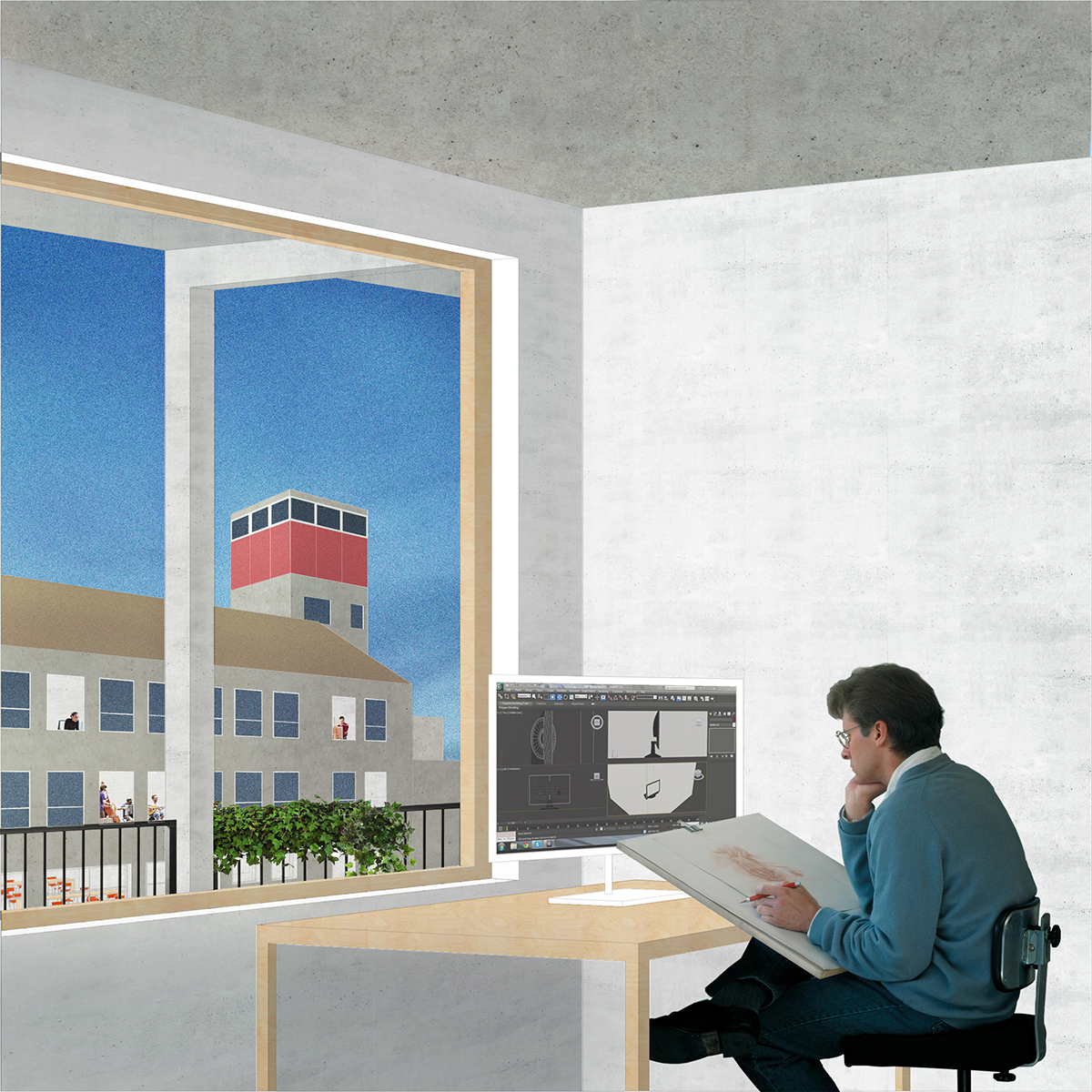 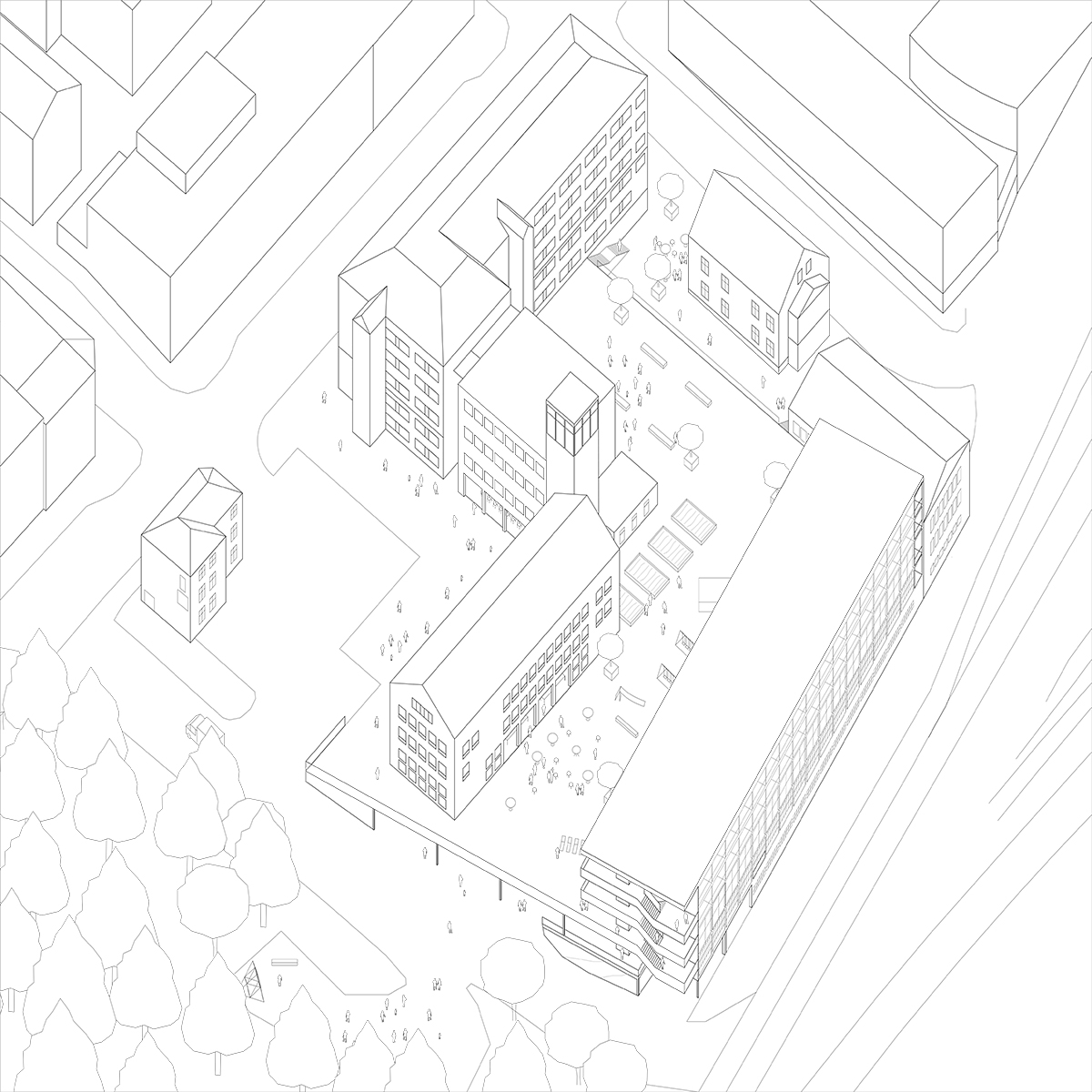