Shopping is an inescapable fact of contemporary society, and however we may try to deny it, shopping has become one of the only moments where we experience public activity. This is by no means a criticism of shopping itself, but simply a consequence of the consumer society we live in today. What is concerning is that today, any notion of “public” is intrinsically linked to the unending processes of production and consumption of the global market economy. Despite attempts to idealize the public sphere with formal references to squares and markets, to appear in public today is inseparable from the consideration that economic value flourishes where there is social interaction. Although the shopping mall is a privately owned and operated enterprise, the fact that it has become our primary form of public life speaks to the impossibility for the public sphere to be described in a representational manner. The contradiction of the shopping mall, a private space that appears public, marks the possibility of the mall itself as the bastion from which to begin reconsidering the value of public space in the 21st century.

Despite all the formal gymnastics that have occurred in the evolution of shopping mall design, the form of the mall today is no different from the arcades of the 19th century. However you clad it, however you alter the finishes and forms of the interior, no matter how much “strange” architecture is injected into it, the mall itself, defined by an interior street and flanked by retail has changed little in the past 200 years. Yet as we consider the shopping mall today, its demise appears almost inevitable - patterns of consumption have changed. On the one hand, sustainability and environmental concerns implore us to reduce our hysteria for endless consumption. While on the other, digital platforms and ever increasingly sophisticated logistics networks provide easy access to a cornucopia of goods that no mere mall could ever match. As such to consider the shopping mall today, means to move beyond its definition as a place for the exchange of material goods and subsequently to move beyond the objective of the mall as a means for providing the most efficient and effective amount of rentable retail space.

The mall can no longer aim to simply induce the hysteria of mass consumption and must embrace that its value comes from the critical mass of activity and interaction that can manifest within and around it. In its most successful form, the mall is this century’s social condenser, described by Rem Koolhaas as “the programmatic layering upon vacant terrain to encourage dynamic coexistence of activities and to generate through their interference, unprecedented events.” In this form, the mall can bring together all groups of people, from the elderly to the young, not simply for shopping, but for a shared purpose through the interactions and collisions that occur within the volume. The most successful shopping plazas and malls already hint at this condition. They succeed when situated near a diversity of programmes such as residential areas, offices and transportation hubs. The future of the mall is not simply shopping, but to redefine itself as the space where we can begin to understand what it means to appear in public.

The limitation of the interior street is compounded by the introduction of the atrium to the shopping mall typology. The moment the retail floor plate was multiplied, the atrium was introduced to provide the continued illusion of a “public” street. While this efficiently increases the amount of retail space, it also radically alters the experience of the interior street, fragmenting and dividing what was once a cohesive space. The pedestrian, far from being confronted with a multiplicity of interacting meanings and experiences, can only shuffle from one storefront to another.

This project seeks to reclaim the possibility of a shopping mall to accommodate a true multiplicity of experiences, to become a city within a city. The project simply defines two distinct elements: An open and loosely defined street level, covered by a single level elevated podium. The street level, populated by a column grid is completely open to the exterior. This covered but unconditioned space provides an informal backdrop that is a direct extension of the city into the mall itself. Anchor tenants and services are arranged throughout this level and can take any form, from office and residential lobbies to large scale retail stores, to schools, daycares, parks and galleries. The generic quality allows multiple identities to co-exist and operate, and as the space is unenclosed, even outside of set opening hours. The flexibility of the ground plane, compounded with its direct connection to the city around it, allows city life to flow through the mall itself.

The elevated podium, continues in the tradition of the shopping mall to provide generic rentable retail space. With one distinction, instead of being organized around a central atrium, it is uniformly lit from above by skylights. The possibility for natural light makes it possible to accommodate uses beyond retail and expands the definition of the mall from a space for consumption into a space that makes production possible. In the contemporary paradigm of immaterial production, where production is no longer just the production of material commodities but the informational and cultural content of those commodities as well. Visitors are not just passive consumers, but through the social interchange and exchange of information and culture, are producers themselves.

The tradition of displaying advertising content within the mall itself, already points to the productive nature of simply being within the mall itself. However, the display of advertising on the exterior of the building is a garish and ostentatious side effect of the windowless mall. Rather than concealing and attempting to render neutral this aspect of exchange, this project fully embraces the value of the mall as a site for social interaction. The underside of the lifted podium is a veritable “second” facade and perhaps the most important. A media facade of constantly changing content. Viewable only from within the perimeter of the mall itself, the exclusivity of this manner of content exchange explicitly reveals the nature of public space as one of the most valuable commodities available today. 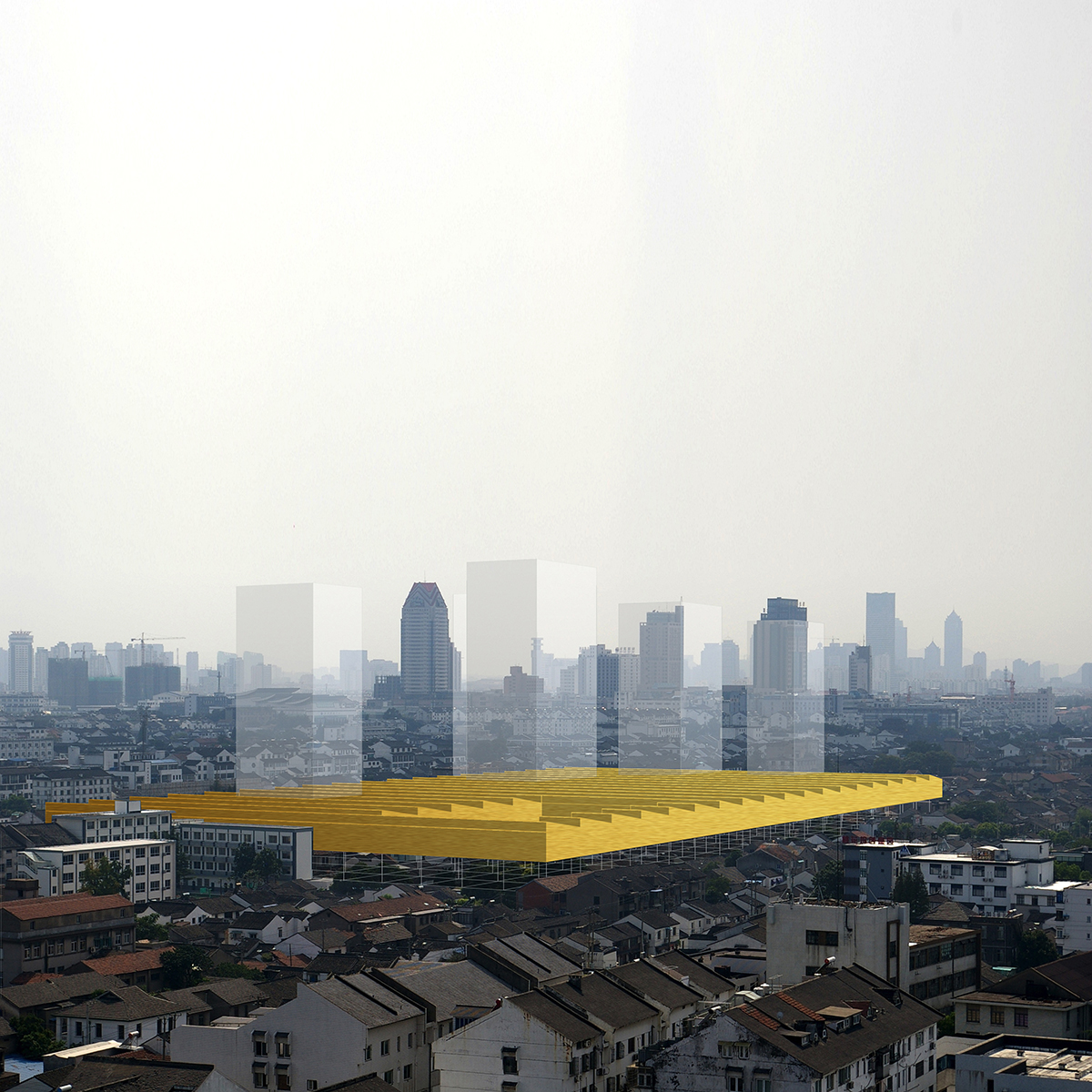 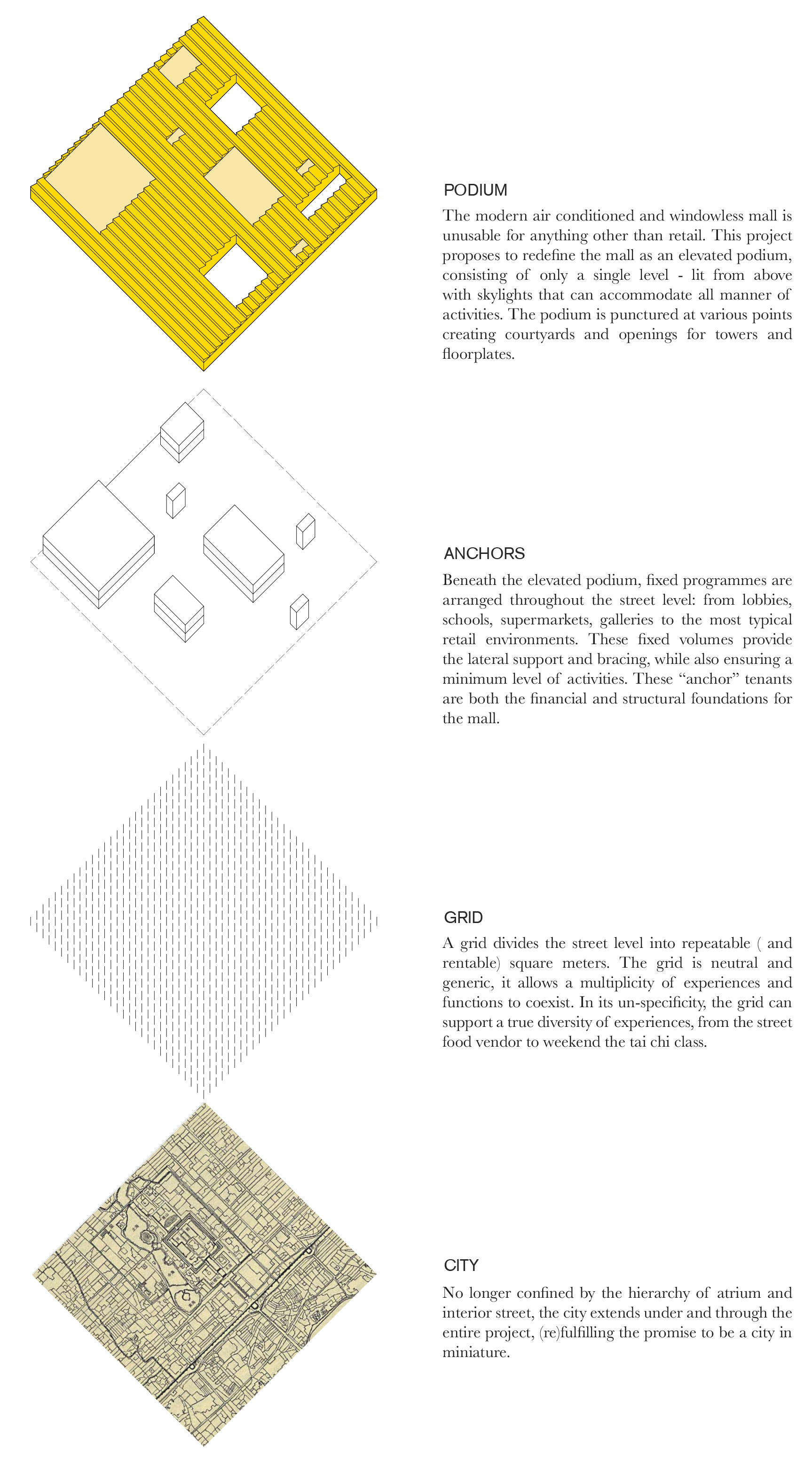 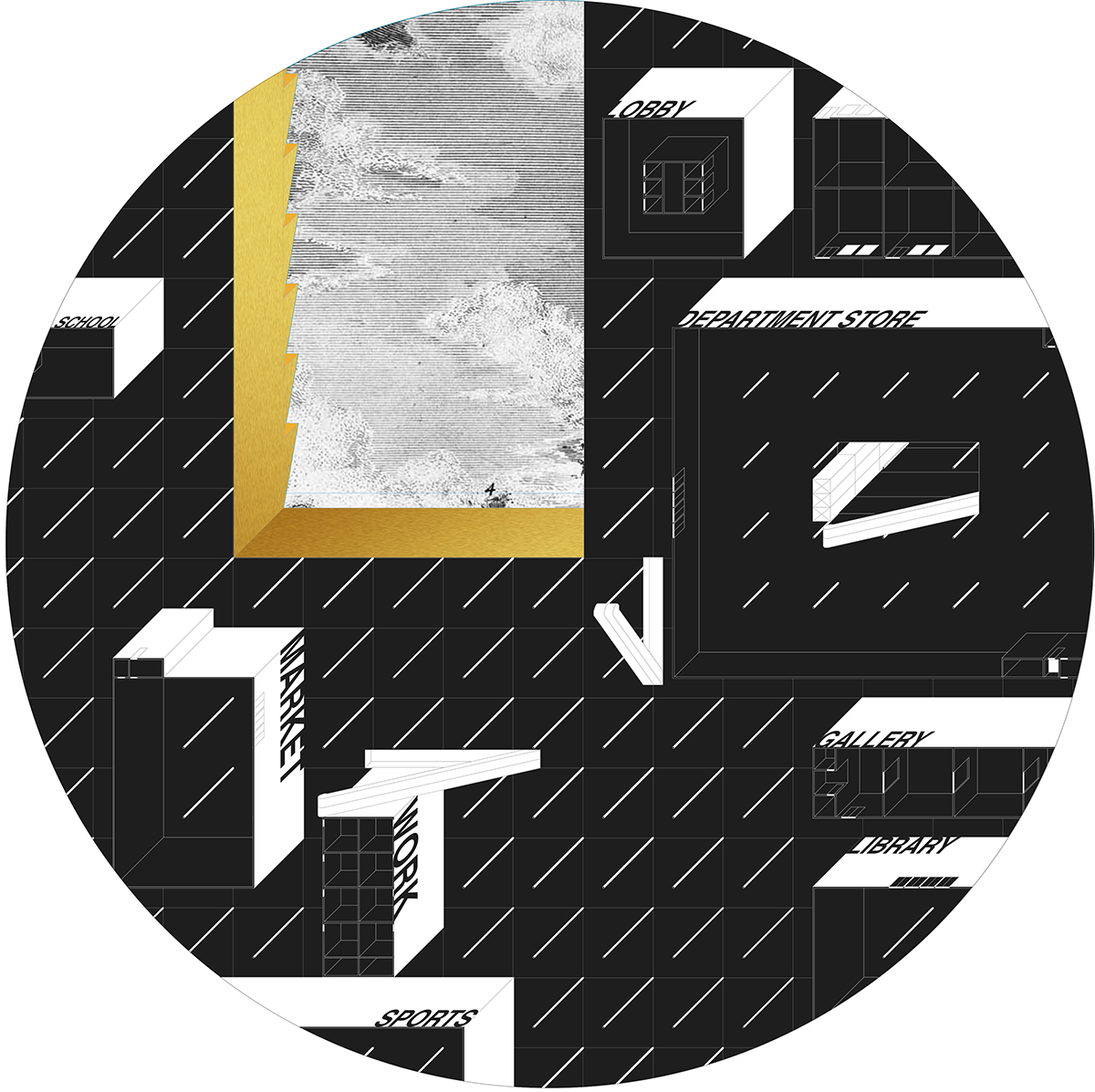