IN THE GARDENS OF NEW BABYLON
Where is the Ground?

Modernity, Incomplete
With its large scale services and concentrated housing areas, Itäkeskus is characterized by its suburban qualities and the prominence of car and parking infrastructure. Itäkeskus will need to transform into a lively and dense urban environment as the future urban center of eastern Helsinki, one that appears at odds with its current condition. Yet it would be a mistake to simply abandon the modernist planning principles that have defined the area for so long. In certain ways Itäkeskus has been a success, with commercial centres offering high quality services, and a level of activity and diversity that is unique in Helsinki. The concentrated housing blocks, which appear melancholic and imposing, also liberate the space between buildings for other uses. However as they stand today, the space between buildings is simply relegated for parking and undefined functions that are underused.

This project proposes to realize the potential of modernist planning between buildings, to create spaces and programmes to be shared and used by the community. With comprehensive landscaping and zoning strategies we see emptiness as an opportunity to create new pedestrian scales that are liberated from vehicle traffic. In doing so, we attempt to challenge the notion of ‘defensible’ space that have made courtyard typologies the de-facto approach to lively urban environments. Where low rise courtyard typologies were seen as an antidote to the ails of modernist planning, they also serve to privatize large areas of public spaces that could instead be shared. Similarly by nature of their territoriality and natural surveillance, courtyard typologies are exclusive and homogenizing. The diverse and multi-cultural community in Itäkeskus is a testament to the possibility that the modernist dream of the city held. Spaces for interaction and engagement that extend beyond the scale of the housing block, beyond notions of private ownership, beyond a homogenizing milieu of urban life and towards the gardens of new babylon.

Where is the ground?
Itäkeskus is currently dominated by the traffic of Itäväylä and the car oriented lifestyle of the area. While there are improving connections and public transit infrastructure, the transition from cars will not happen overnight. The inward facing character of the commercial centres and the scale of the streets highways will inevitably remain challenging for pedestrian traffic along the street level around Itäkeskus. We propose to lift the plane of urban activity by placing car parking and infrastructure on the ground. Car parking serves as the base for large plinth areas that contain recreational and green spaces for the community. As modes of transportation transition away from cars, the structures can be repurposed for other uses as Helsinki transforms into a carbon neutral city.

The plinth level is designed with a comprehensive landscape strategy, integrating various planting types and soil depths from recreational lawns, perennial plantings, tree clusters and vegetable production to increase rain water retention and biodiversity while also improving views and microclimate for the housing areas. The simple massing of the housing blocks are designed to incentivize monolithic construction techniques that are sustainable and durable. On the plinth level, the blocks are used for small scale commercial and community premises that can interact intimately with the surroundings, providing opportunities for smaller ventures and entrepreneurs. These spaces compliment the high quality services of the commercial centres in Itäkeskus. The current diversity of Puhos shopping centre is due to its smaller scale retail spaces for entrepreneurs and small businesses, a diversity that is at threat as the Itäkeskus develops. By embedding smaller premises into housing, independent ventures, working spaces, small shops, and community services can be fostered by lowering capital costs. Placing them on the plinth allows them to support and be supported by the urban activity on the level, strengthening the cosmopolitan character of Itäkeskus.

East Urban
Outdoor urban activity is placed on multiple levels across the site, allowing Itäväylä to be bridged in multiple ways. Utilizing double level bridges, bridging points are minimized, while creating zones of vertical intensity that creates a cosmopolitan intensity that opens up a multitude of spatial experiences. The new plinth levels around Easton and Puhos connect to the existing multi level character of the area, facilitating smooth connections to Tallinanaukio and over the busy vehicle streets while opening up new roofscapes and entry points to the surrounding commercial centers.

New structures are introduced to facilitate this vertical movement, particularly with the extension of the Stoa cultural center and the greenhouse connector along Itäväylä. The addition to Stoa activates Stoa square by providing new vantage points for the outdoor stage, while also making alternative entrances for the various services consolidated in the building. The greenhouse connector serves as a noise protection barrier, while producing alternative forms of interior space where the community can engage in planting and growing species of flora from all around the world. By inserting alternative forms of vertical connectors, the project facilitates movement over the site in all conditions and during all hours with enclosed and outdoor walkways.

The goal of the project is to create a distinct ‘east’ Helsinki urban character that can be realized with the introduction of new shared programmes and functions alongside housing, offices and commercial spaces. High quality shared spaces and experiences will continue to bring together diverse cultures and groups in the way that Itäkeskus is already doing as it develops in the future. 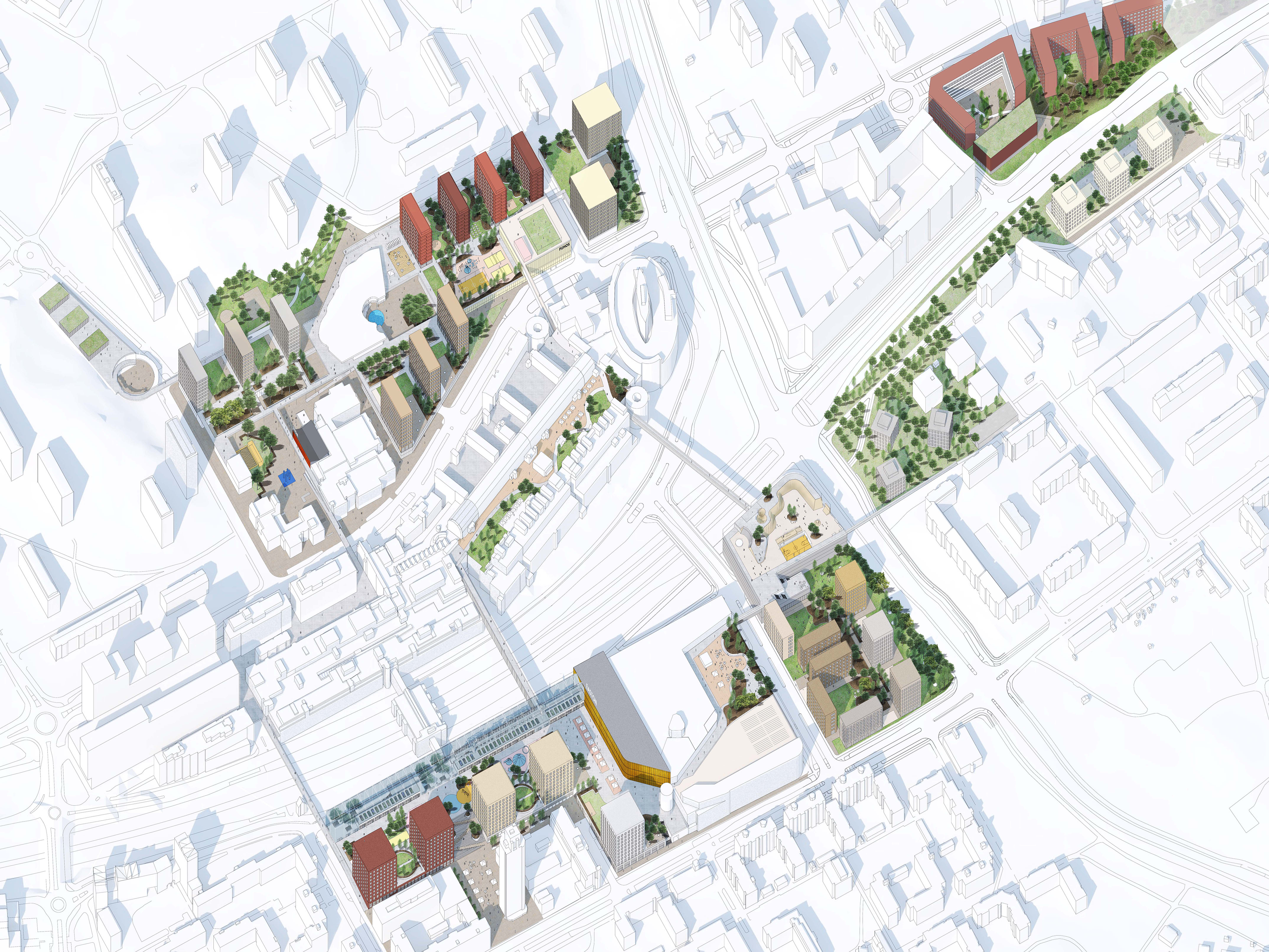